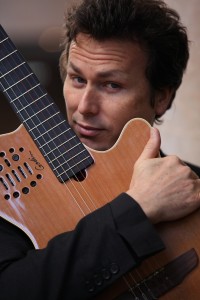 Gavin was born in Kent, England and moved to Perth, Australia in 1981. Shirking a real job for the gypsy lifestyle, he travelled the world busking with his guitar in exotic places like India and Greece. Eventually the love of playing guitar became a crusade, and he studied classical technique with the likes of Perth virtuoso Stephan Bulmer and Colin Reeves. Completing an Associate Degree in Jazz and Contemporary Music at the Perth Conservatorium of Music, Gavin formed the jazz/Latin fusion guitar band Urban Gypsies with Glenn Rogers. He released the fiery debut album Gypsy Fever, to wide acclaim in 2000.

Gavin went on to support the Buena Vista Social Club, Cassandra Wilson, Demis Roussos and many others. In 2003, he moved to Sydney to continue the widely respected Urban Gypsies brand with singer/songwriter Simon Phillips. Together they recorded the gritty second album Sauvage, featuring instrumental guitar world music. It was released through MGM and promoted through SBS, the ABC and local media, receiving a 3/4 star review in The Sydney Morning Herald. In 2008 Gavin collaborated with European-based guitarist Gordon Tan for a third, more polished album titled Beautiful Catastrophe.

Gavin has been lucky to live his dream as a guitar specialist, playing with other acclaimed Musicians at concerts and festivals and simply making beautiful music together!  This list of collaborators includes cellist Anatoli Torjinski and guitarist Dieter Kleemann, who is a legend in the Sydney scene over a stellar 30-year career. Gavin continues to perform and teach around Sydney, and is collaborating on a fourth Urban Gypsies instrumental album named Samsara, due for release in 2015.