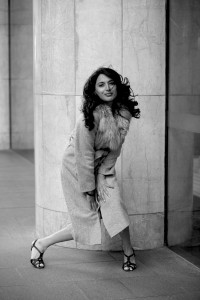 Niyati was born in Gujarat, India and spent her early years in London before moving to Sydney, Australia in 1982. As the child of runaway lovers – both performers in their own right who eloped from India during the turbulent 70’s- romance and drama is in the blood. Not surprising then that she grew up performing and singing for a variety of stage acts, musicals and plays whilst completing her studies in Communications and International Studies from the University of Technology Sydney and the Université Lumière Lyon 2 in France.

Since graduating Niyati has continued her passion for dramatic storytelling through several avenues: writing and producing for TV, Film and Radio; running the weekly show Between the Covers at Jazz/Arts station Eastside Radio 89.7FM…
and of course, telling it like it is with her honeyed vocals in Breakfast at Tiffany’s.