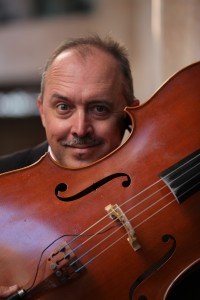 If this reads like a Soviet account of talent, excellence and hard work, that’s because it is!

Anatoli grew up in Odessa, Ukraine and completed his education at Stolyarski Selective Music School, majoring in violoncello, piano and guitar. Graduating from the Odessa Conservatorium of Music as an orchestra performer, soloist and music teacher, Anatoli consequently settled in Sydney, Australia. He played with the Sydney East-West and Willoughby Symphony Orchestras and taught at the Australian Institute of Music, as well as completing a post-graduate performance course at the Sydney Conservatorium of Music.

In 2000 Anatoli formed an experimental acoustic duo “Double T” with talented guitarist Yuri Terletski (now member of Russian pop group “Umathurman”). Their first CD Album Beyond the Circle was nominated as the Best Record of 2001 in the Australia–based World Music category. Anatoli became an Aria Award winner for Best World Music Album as part of the gypsy band Monsieur Camembert. He regularly performs with talented groups and musicians across Australia and overseas, including the brilliant Urban Gypsies and Breakfast at Tiffany’s.